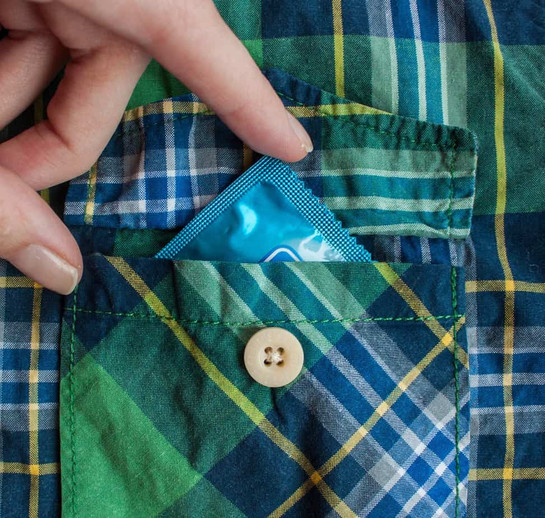 In an ideal world, this is not a topic that we would even need to be discussing and, in that world, all of this would be well and truly covered by the education system. But as of yet, no such perfect world exists and so, here we are, having to personally inform people exactly what a condom is and the importance of using one.

In this post, we wanted to revisit the basics and to offer an introduction to the entire topic. In doing so, we will cover exactly what a condom does, how it works and exactly what it can protect against.

What is a condom and how exactly does it work?

In a most basic sense, condoms are thin, small pockets of latex, a form of rubber, that are used to cover the penis during sex. A condom is placed at the top of the penis and rolled downwards to cover its entirety. The condom then collects the semen and prevents sperm from entering the vagina and hence prevents the chance of there being an unwanted pregnancy.

Whilst latex is the most common material used in the production of condoms, other materials have also been adapted, as some people do find that they have a latex allergy. In this case, condoms can often be made from plastics, lambskin or other animal membranes.

Aside from abstention, condoms are one of the most reliable forms of contraception and unlike other options, they come with much less risk. They’re also a much cheaper and less invasive form of contraception as they are not digested and therefore don’t mess with your hormones.

Overall, condoms tend to be a better form of contraception and should be used, even when there are other contraception methods in play.

Do condoms protect against STD’s?

As we mentioned earlier, we, therefore, suggest that you always use a condom in conjunction with any other form of contraception.

In placing a cover over the penis, condoms protect from STD’s, as they prevent there being any direct contact between the two partners. In preventing, skin-on-skin contact, they prevent against the spread of most STD’s and even decrease your chances of contracting herpes or genital warts. However, with these diseases condoms are not always effective as sometimes areas of the skin that fall outside of the condom can still come into contact.

However, it’s important to point out that lambskin condoms, or any condoms made from animal membrane, do not protect from STDs and in actuality only latex and plastic offer STD protection.

Do men ever have any problems with condoms?

Generally speaking, most men do not encounter any kind of problem when it comes to using condoms but, in some cases, some men do suffer from an allergic reaction or irritation. More often than not, in the rare incidences where there is some kind of allergy, it will usually be from the latex. But there are now numerous alternatives on the market and it’s just a case of doing some prior research.

Overall, condoms are one of the best forms of contraception and protection and we suggest always having a few to hand.

How to put on a condom?

So, you have purchased your condom, checked that they are the right ones and now you just need to ensure that it is used correctly. And that is where you hit your first stumbling block.

Aside from getting a banana and doing the old school roll down, this blog post will be the next best thing.

In this post we will offer a step by step guide to how to use a condom and the easiest and quickest way to apply one.

Unless you have only just purchased your condoms from a reputable store, we suggest that you immediately check the expiration date before you even think about using it. In most cases, condoms last for a very long time, but they do expire and this hugely lessens the chances of them working. So, step one should always be that you ensure that they are still within their date.

Next, it’s time to open your condom and this is also a step that should be taken with great care and caution. We often hear of people who use their teeth or scissors to open the packaging, but this can risk damaging the condom itself. Most condoms come in an easy to tear packet, just make sure that you find the right corner and open it that way.

Take the condom from your palm by pinching the tip, which should now be pointing upwards from your hand and place it on the head of your penis. Be sure to leave a small space, as this is the part of the condom where the semen will later collect.

Now you want to start unrolling the condom down the length of your penis, continuing to unroll until you get to the end. If you find this step to be a little bit difficult, consider adding some lubricant to your penis before you apply it. This can help the condom to unroll that little bit easier.

Once you have finished, hold onto the rim of the condom and gently pull yourself from your partner. This will ensure that the condom stays in place and that you have no premature spillages at this stage.

Once you have fully removed yourself from your partner and gotten a sufficient distance away, go ahead and dispose of the condom.

These steps definitely become more fluid and natural with time and before long, you’ll be able to apply a condom with relative ease and caution.

How effective are condoms

But just how effective are they?

Generally speaking, if condoms are used correctly, every single time, they have a 98% chance of preventing pregnancy. But, as with most things in life, people are not perfect and so there are always things that could go possibly go wrong. As a result, in real-life, condoms are roughly 85% effective.

In context, this means that out of 100 people, 15 people who used a condom will find themselves falling pregnant. Of course, this statistic is of people who are only using condoms as their protection and does not include people who are using any other form of contraception as well.

But despite there still being a chance of pregnancy, even when a condom is used correctly, there are other things that can be done to safeguard from an accidental pregnancy happening.

In this blog post, we are going to offer some suggestions on how you can keep those odds as low as possible.

The best form of offense is a good defence and that rule definitely applies to condoms. If you want to truly ensure that your condoms are as effective as they possibly can be, make sure that you take the time to choose the right type, size and brand for you. Check, double check and triple check every single aspect, making sure that you avoid any problems beforehand.

What’s more, you should also ensure that you check the date of the condoms that you plan to use because whilst they do last a long time, they can still expire. An expired condom is a disaster waiting to happen, so make sure that you check first.

Get good at putting it on correctly |

This is something that gets easier the more often that it’s done but knowing how to correctly use a condom will help you avoid any future issues. Remember to ensure that you have it the right way and also that you remove it carefully afterwards. For added security, make sure that you use the condom at all points and don’t let it come off half way through.

Use a second form of contraception |

Whilst condoms are the only form of protection that can help to prevent the spread of STDs, there are plenty of forms of contraceptives out there. We suggest that where possible, you use a condom in conjunction with another form of protection, as this is going to help protect you on more than one front.

Do not use more than one |

Using more than one can actually increase the risk of something going wrong, as it can increase the chances of it ripping or tearing.

Despite there still being a small chance of unwanted pregnancy, even with a condom being used, condoms are the most reliable and encompassing form of protection. It’s always better to use one and not just rely on other forms of contraception. At the end of the day, a condom will decrease your chances of falling pregnant and massively protect you against any STD’s.