We put our faith in them but how are condoms really tested? 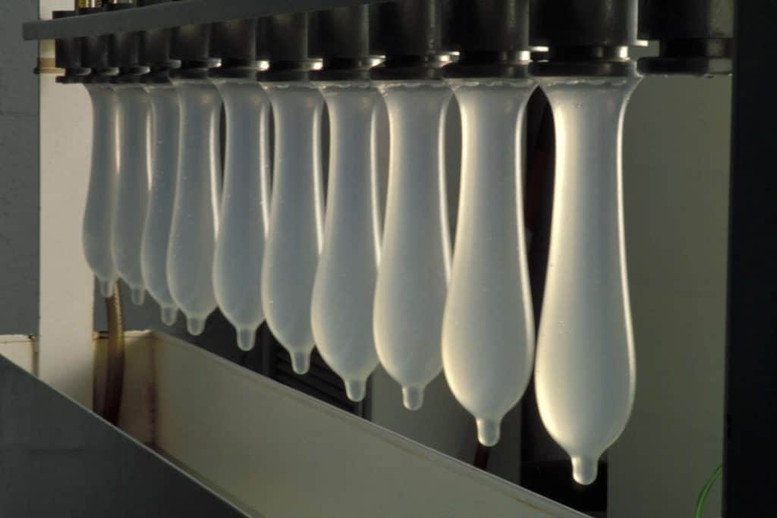 Condoms are usually tested generally by being stretched, either by being filled with air or water.  After manufacture, random packets are sampled and re-tested but is there more to it than that?  What actually happens in the factory?

Condoms are pretty reliable as a form of contraception and are the ‘go-to’ choice for protection against unwanted STIs and worse.  Their use is not subject to the same human error and variation than, say, the contraceptive pill.  This has to be taken routinely at the same time every day and with a habit like that, it’s easy to miss a day and not realise.  Then, there is the influence of antibiotics, the pill is totally subject to human error.

The effectiveness or otherwise of the condom is also in the hands of humans, literally, but one would hope that the physical and visual act of putting it on would highlight any human errors so there were no nasty surprises later on.

So how is it possible to place your trust in a condom packet?  Images of a malign spirit running around the factory with a sharp pin are the stuff of nightmares.

We should be curious about how condoms are tested as the implications of a defective condom are mind-blowing.

The condom is stretched over a metal shape called a mandrel and then the condom is exposed to a highly charged electrical field using the medium of either water or air.  Rubber is not a conductor of electricity so the mandrel should remain unaffected by the electrical current.  If the mandrel is affected then that means there must be a tiny pinhole within the condom.  condoms which fail this test are thrown away.

Random sampling is sometimes also called ‘dimensional testing’ and this is where an entire batch is assessed against benchmark criteria so the length, width and thickness of each condom in the sample.  If there is a sole failure within the batch then the whole lot is discarded.

How are condoms tested for strength, pressure and friction?

A random selection of condoms are filled with air until they burst, this is called ‘Air Burst Testing’.  The quantity of air just pre burst point is measured to make sure it is in line with the published manufacturer’s guidelines.

The integrity of the package seal

Unwrapping a condom should be done from a packet which has not been tampered with or damaged in some way in transit.  All condoms are vacuum packed with a seal which should remain intact until the packet is opened just prior to use.  A vacuum is used to check random samples of condoms in their packets once they come off the production line.

This is a concern for many people as tiny leaks can be invisible to the human eye and therefore go undetected.  Leak testing is performed using water, the condom is simply taken from the packet and filled up and then examined with the naked eye for any tiny droplets or seepage.  Some manufacturers take this a step further and seal over the end of the condom and then massage it on top of a dry cloth.  Any resultant moisture will be detected by the cloth, a failsafe against human error.

condoms are also tested for their tensile strength using a machine which elongates them until they break.  The amount of force required is recorded and should fall within the manufacturer’s guidelines.  Routinely, the tensile test is only used for condoms which are marketed as super strength or extra strength.

Every manufacturer tests its condoms differently but they should be transparent with consumers about their quality control processes.  In the UK, the key insignia to look out for are the British and European standards kite safety marks.  The CE mark shows that the condom meets the standards of the Medical Device Directorate.  The Kite mark is a UK emblem which is linked to the British Standards Institute or BSI.  Stay safe, always buy condoms with these dual accreditations and quality standards.  You can be reassured that both the manufacture and the testing process adhere to a defined standard.  BSI independently sample products on a monthly basis to ensure they do comply.