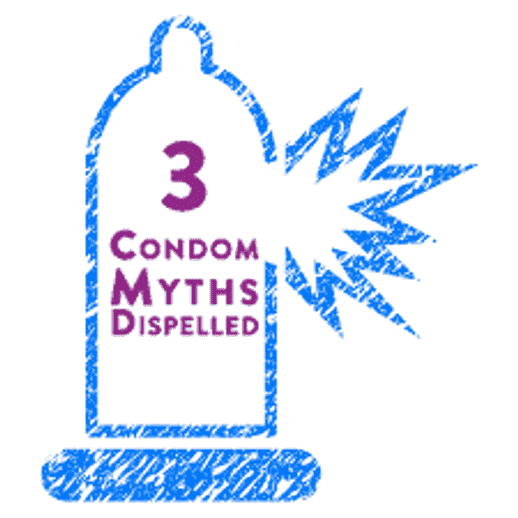 It is believed that condoms were first invented hundreds of years ago and some people even claim that there is 12,000-year-old cave painting showing early condom usage. However, 1642 is the very first recorded condom use, so whichever of these you chose to believe, they’ve been around for a really long time.

Since then, condoms have become a crucial and favoured form of protection with them being the only form of contraception that protects against both STDs and unwanted pregnancies.

They’ve undoubtedly come a long, long way since either of the above dates and yet despite that there are still some huge and unfounded myths that remain attached. In all likelihood, this is mostly because of a lack of education but regardless of the reason, many of these myths continue to exist.

In today’s blog post, we are going to be debunking some of these myths and talking through where they are wrong.

This is probably one of the biggest failings of the education system, as many people still believe that condoms don’t protect from the spread of STDs but as you will hopefully have realised by now, they definitely, definitely do.

Unlike other forms of contraception, which are predominantly aimed at protection from unwanted pregnancies, condoms offer a unique barrier, which helps to prevent from infections diseases.

At the moment, it is estimated that women and men who use condoms have a reduced rate of contraction of around 62%. And most researchers believe that this is probably vastly underestimated, as there has been little research into the area.

But whatever the actual number might be, there is a dramatic reduction in your STD risk if you do use a condom regularly.

In many ways, this depends on how you define effective and what exactly you are looking for. At the moment, there are four kinds of predominant condom materials – latex, polyurethane, polyisoprene and lambskin – and each has differing perks and results

Most research has proven that latex, polyurethane and polyisoprene are all effective at preventing both STDs and pregnancies. And yet there is often some debate over the true effectiveness of polyurethane in comparison with latex. Whilst most clinical tests have proven that both are equal in terms of preventing STDs and pregnancy, there has been some concern over the consistency of polyurethane. Normally, polyurethane condoms are less elasticated and tend to have a much looser fit and as a result, they are 3.- 5 more likely to break during sex. However, with the right measures taken, all can be seen as effective.

However, if you take lambskin condoms, these have much different definitions of effectives, as these only protect from pregnancy and not STDs. As it is a natural material, lambskin condoms have tiny pores in the surface and whilst they are too small for sperm to get through, they can mean that infections can spread between partners. As a result, lambskin condoms can be seen as effective in some ways and yet entirely ineffective in others.

Wrong, condom size does matter and if it’s done incorrectly, it could have huge consequences for you both.

Incorrectly fitted condoms can increase the chances of them slipping off or breaking and as a result, they can sometimes lead to accidental pregnancies. So, if this is something that you want to avoid, definitely get the right size. Always measure yourself before purchasing any and make sure that you have the right size for you.

In most cases, length tends to be pretty average and for most people, it’s girth that can be an issue. However, that said, always measure both ways, just to be on the safe side.