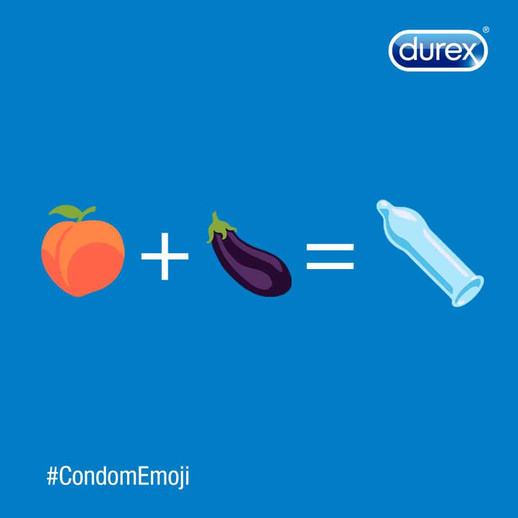 Okay, so it was a hoax, but Durex had a valid point to make when it highlighted the absence of a condom emoji in the library of emojis in use today.

Emojis have become a huge part of advertising campaigns and brand identity so Durex issued a tweet about a promotion for a new aubergine flavoured condom because the purple fruit is used as a phallus in emoji language.  Durex later revealed that the tweet was a hoax, a stunt to highlight the absence of a condom emoji and how significant this really is.

For Durex, it was about promoting safe sex and speaking in the language of young people in a trendy, light-hearted but very effective message.  This approach has been copied by other organisations keen to convey a safe sex message to teenagers and young people in particular.  Durex applied to Unicode in 2015 to have a condom emoji added to the menu on the basis that safe sex is a public responsibility but their application was denied.

What a condom emoji will allow young people to do is to communicate without embarrassment on matters which are of real concern like staying safe during sex.  Using an emoji is a totally different vibe to typing the word, ‘condom’ or using a slang term.  There are nearly 3,000 emojis in the Unicode Standard but nowhere is there an image for a condom or for birth control, yet.

Two American ladies have issued an application for inclusion of the first-ever emoji to represent birth control following an emoji proposal workshop in New York run by Emojination.  This organisation is dedicated to making emojis more inclusive and aims to dilute the stranglehold of the Unicode Consortium which is made up of the big tech giants like Apple, Facebook and Google amongst others.

Emojination has form with previous successes including the ballet flat, i.e. not a high-heeled shoe, the dumpling and the hijab.  The significance in the 20th century of the birth control pill makes it astounding that it has not yet been recognised with its own emoji.  Sensitive to the universality of emojis and previous difficulties with alcohol-related images, the emoji was entitled, ‘Pills in a circular case’.  The application is still pending with Unicode not rejecting it outright but requesting an adaptation to the design.  Approval can take up to two years so it really is a question of watch this space.  No-one can deny that safer sex is a good thing but emojis are used worldwide across myriad different cultures, creeds, religions and peoples.  Unicode has to ensure that it does not offend one group whilst pleasing another, possibly why Durex’s application for a condom emoji four years ago failed.