We have gathered some of our best selling and most asked for coloured condoms all on one web page.  You can see them all and take your time deciding which ones would be best for you. Who knows? You might choose several and surprise your partner!

We have gathered some of our best selling and most asked for coloured condoms all on one web page.  You can see them all and take your time deciding which ones would be best for you. Who knows? You might choose several and surprise your partner!

Do you ever get sick of the beige things? Beige clothes, beige food, beige furnishings – anything that’s beige when a colour can be used, basically. Beige does have its place, obviously, but probably not in overwhelming quantities. It’s like eating plain pasta for the rest of your life, without a sniff of pesto in sight. Well then, this automatically extends to other products – why use plain condoms all the time when you’ve got the fun ones available to you? Often going hand in hand with flavoured condoms, these novelty ones are definitely very popular. 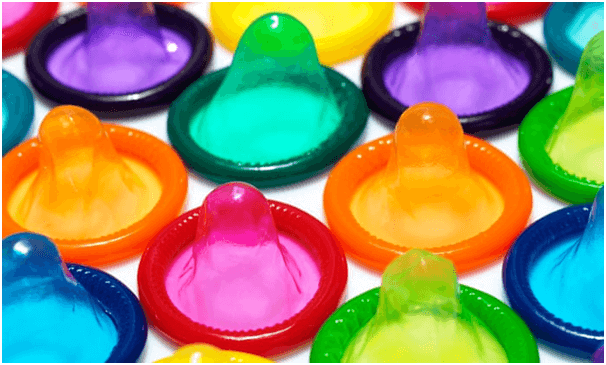 But before we get into the details, it’s definitely worth looking at how these coloured condoms even came into existence. Did someone just wake up one day and think – I’d like to wear a green condom? Not quite! They all do the same thing, so how did coloured ones become a thing?

They were actually first used way back in 1949 in Japan, so they’re probably older than you’d think. Over here they didn’t really find their corner of the market until a bit later on when condoms suddenly became high profile in the 80s and 90s as a result of the explosion of AIDS. Once preferable for safe sex, condoms now became vital to protect sexual health and anything that could promote safe sex was seen as almost essential. And so, novelty condoms began to worm their way into the market. They might have started out as a bit of fun, but by the late 20th century they were actually quite important in encouraging people to use a barrier method of contraception.

But not only was it a public health issue, it was also a commercial opportunity for eagle-eyed condom manufacturers who are not ones to pass up the chance to grab more of a share of this lucrative industry! As we’re sure is perfectly obvious. So with these things in tandem, coloured condoms have flourished in popularity.

Why not?! They bring a little fun and novelty into the bedroom, a talking point – a giggling point – a laughing point – whatever! It’s all communication around contraception which is never a bad thing. People always have a favourite colour for their clothes, accessories, cars, shoes, jewellery, etc. and now they can bring this colour into the bedroom! There are colours everywhere, pink/black/red/green/yellow as just a few. Roll up, roll up, if you’re after a certain colour then we’ll have it here!

And have you ever thought of luminous condoms? It probably wouldn’t be the first thing to think of when you’re selecting your condom contraception, but glowing condoms are out there and they’re perfect if you’re a couple of who prefer sex with the lights off. It’s not going to get lost and if it’s torn or whatever then you’re more likely to see it. Or alternatively, it’s just a bit of a laugh, something slightly outside of the ordinary, beige condoms that we spoke about before. They can be very handy things!

Coloured condoms also often promote relaxation in the bedroom. It’s something that you can both have a bit of a giggle over and choose your favourite colour/s from a multipack selection, which is great for sexual bonding. Contraception can sometimes be a bit of a sticky conversation to have and especially if you’re new to the scene, or you’re with a new partner. Novelty condoms take some of that awkwardness away and makes it easier to discuss who’s going to buy what and when. If you’re the one who wants orange condoms then you’re the one who has to find them!

They’re aren’t just for fun though. It’s perfectly normal to find the thought of oral sex slightly off-putting – nothing wrong with that, we can’t all like all things. But using a coloured condom can actually make safe oral sex more appealing. It’s like a kind of distraction, getting your mind away a bit from what you’re doing (although it goes without saying that you should NEVER do anything that you don’t want to do).

To take a bit of a different direction, some people may feel like wearing a coloured condom is silly and makes them feel awkward. Well, we only have one thing to say here – if they’re your only option then it’s better to feel silly than not use one at all! You’ll feel far sillier nine months down the line, or when you get bad news at a sexual health clinic. They’re just condoms after all, if you’re not a fan of the coloured options then just remember that you’re probably not going to be looking at it for very long.

You have plenty of choice for these coloured condoms. If you’re after a certain colour then you’re practically guaranteed to find it, or if you aren’t sure which colour will suit your bedroom mood, then why not buy a multipack and try out the colours of the rainbow in your own time?

Here are some of the options you’ll find when you’re browsing the British Condoms website for coloured condoms:

Durex Select are flavoured as well as coloured. They come in a box of twelve to pick from: four strawberry, four banana, four kiwi and four orange. An excellent selection if you’re looking for a variety of colours.