How do I talk to my teenager about sex? 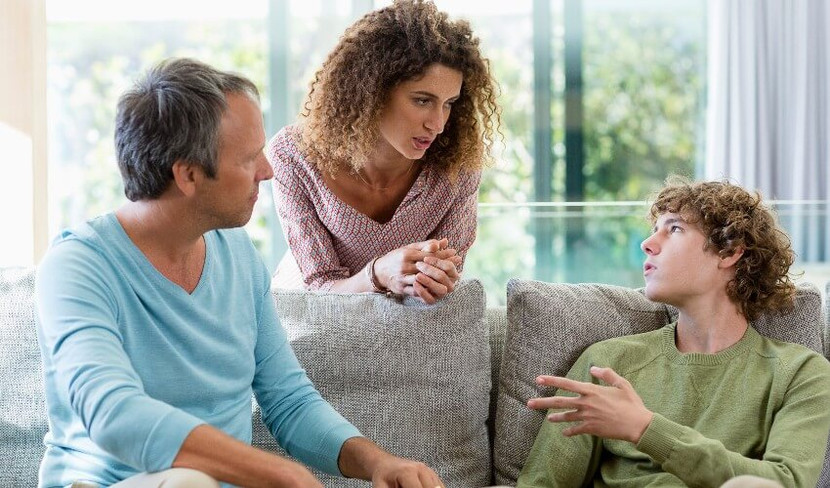 Oh, the joys of being a parent! Discussing sex with your children can seem like absolute anathema to your normal style of parenting. But it’s as inevitable as aging, one day they’re toddlers playing in a ball pool and the next they’re saying goodbye to primary school and moving up to secondary. Then before you have time to blink, it’s sixth form, A-Levels and Uni on the horizon; wasn’t it just last week they turned three?? There are things that you have to face as a parents throughout childhood, the teens and as adults, and you have to grit your teeth and get through it. Laying down the law in terms of their behaviour, handling delicate friendship issues and sorting out school bullying are just a few examples. But as adolescence approaches, it’s time to think forwards to when they’ll start forming intimate relationships of their own. When every teen hits puberty, there’s such a rush of hormones that it makes sex almost impossible to not think about, it’s inevitable that they start to carve out their own identity and look for partners. Bringing your child up to be a loving, caring, respectful partner, but one who is also able to look after their own interests is a parenting goal; not everyone scores it!

Having this closeness also means that they are less likely to listen to idle, playground gossip about the whys and wherefores of sex and how everything goes together. You might not think that children can get things so wrong, but they do, and a simple misunderstanding as children can lead to years of confusion and quite possibly affect their sex life as adults.

You might be gearing up to talk about adult things, but don’t be afraid to go back to basics if you need to. It’s not uncommon for teens to have grasped the wrong idea at some time or other so if they’re showing uncertainty, briefly explaining to them how it all works is a great idea. Just the simple bits starting with how sperm get to the egg and take it from there.

Don’t forget – you can use props. There are dozens of books out there about puberty and sex, so it might be a good idea to pick out one or two to make things clearer, especially for younger teens. This means that they get the info in two ways, firstly by you telling them, and secondly their own reading around the subject in privacy. It can be really embarrassing for teens to discuss sex with their parents, and that in turn can mean that not all of the information is stored. Having a book to reference back to is a great idea and makes it much less likely that any wrong ideas will take up residence in their busy brains.

There’s one thing that you absolutely cannot miss out on, and that’s the subject of safe sex, i.e. using a condom. It’s highly likely that your teenager will already know exactly what they are and how to use them, but what they might not know is that there is an extensive range to choose from – not all condoms are the same. It’s also worth putting a huge emphasis on the fact that condoms are the only form of contraception that protect against both STIs and unplanned pregnancies.

It’s essential that you prepare yourself to be loving and supportive, even if they come out with something that you weren’t expecting. The LGQTB+ community has exploded over the last few years, and with it a sense of belonging that people can have, no matter their sexual orientation. It’s perfectly normal to balk a little bit at discussing something as personal as this, but all you can really do is sit back and accept it calmly and be there for advice/a shoulder to cry on.

What if my teen expresses potentially life-altering views?

Such as gender re-assignment surgery, breast binding or even just using different pronouns on different days according to their mood. Addressing someone as ‘he’ or ‘she’ interchangeably can be a tough thing to get right 100% of the time! But it’s also a sign of respect for your child if you can nail that calm acceptance, even while your brain is whirring nineteen to the dozen. Also bear in mind that this is a very confusing for time for teens and they often don’t understand the gravity of what they’re saying, or maybe even not understanding the concept properly. Don’t take their life views as gospel at this stage, and you MUST explain the consequences of things like gender-reassignment surgery. There have been more than one stories of a young adult being able to go ahead with this type of surgery and then regretting it afterwards, and of course if you’ve had the full surgery then it’s very unlikely that anything can be done to restore what’s been taken away. The basic view here should be that you take any sudden revelation seriously and make them feel like you’re listening and accepting it. That way, they’ll be more receptive to any advice you might give, or expressions of your own opinion.

So, keep it light, respectful, gentle and informative and this way you’ll be doing an excellent job of preparing your teen to go on and have a fulfilling sex life as an adult.